On this site you will find information about Australian musician, composer and arranger Ken Schroder. Learn about his bands as well as samples of his music, photos, release information and performance news. His albums are available on Bandcamp.

Ken’s most recent double album is now available. CUBISM – Schroder’s Big Band recorded live at the Kelvin Club in Melbourne can now be purchased on this website. Please visit the Albums and listen pages to find out more.

In the past Ken Schroder managed Melbourne’s Big Band, The Moovin’ and Groovin’ Orchestra, which was formed in 1990, but now he has launched another big band dedicated to showcasing great soloists and presenting hot arrangements of significant jazz treasures as well as original material. 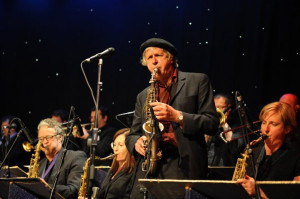 Schroder’s Big Band appeared for the first time on December 5 2011 on a cramped stage at Grumpy’s Green in Smith St, Fitzroy and appeared there again on April 16 2012. A further gig quickly followed for the Bell Awards at the Regent Plaza on May 3 with Rebecca Barnard as guest vocalist.

Grumpy’s Green changed hands and in 2014, Schroder’s Big Band moved to the splendour of the Kelvin Club in Melbourne Place, tucked in behind Russell St and between Bourke St and Little Collins St. Upstairs in this wonderful club is a room with beautiful acoustics; it used to be a sound studio for the ABC many years ago.

The band has played there on a two month rotation, the first Tuesday of every even month and the format is: set one, a small band set with Ken and the rhythm section followed by set two with the full 17 piece band.

There is always at least one new arrangement for the big band and often more, so the repertoire is refreshed.

Apart from the big band, Ken Schroder does some small band gigs. He always does the first set before the big band at the Kelvin Club. In Hobart, he plays at MONA a couple of times a year, as well as the Timeless Way, the Hot August Jazz Festival, and sometimes gets a guernsey at the Clarence Jazz Festival, and the Hobart Jazz Club. Different venues call for different repertoires.

Swingmatism is a small band that specializes in swing music such as Ellington, Basie, Waller, Bechet and Django. Recently Ken was asked to adopt a theme of Kwanza, which is a New York tradition of celebrating Afro culture around Christmas time. This resulted in the minting of the name Afro Blue Notes to reflect the choice of repertoire coming from the Art Blakey, John Coltrane, Jimmy Heath, Mongo Santamaria, Eddie Harris side of things. Music that’s a bit free, a bit modal, a bit more expressive than the old swing.

But what’s in a name!

Quite often, we just choose the tune we want to play spontaneously, it could be a standard by Cole Porter, an original, a Blue Note classic, something from the swing era, or perhaps a current pop song.

Jazz At Richmond Hill 3
© Ken Schroder : All Rights Reserved : Made with love by Pixels At Dawn.